STORIES FROM THE HEART

Chris Kretz’ Life Is Saved By An AED On A Mountainside 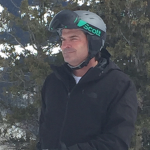 “There were a number of things that saved me that day, but I would not be alive now had there not been an AED present at the ski slope that day.”

On St. Patrick’s Day 2015, Chris started his last ski run of the day at Jackson Hole, Wyoming.  Skiing with his three children, Chris was a quarter of a mile from the top of the mountain when he suddenly dropped to the ground.  After two minutes of confusion, a skier with military medical training stopped to assess the situation and call ski patrol.  He began CPR on the unconscious Chris until ski patrol arrived with an Automated External Defibrillator.  Shocking his heart five times, they finally got a small pulse and could then airlift Chris to a nearby trauma center.

It turns out Chris had cardiac arrest due to severe mitral valve prolapse.  He now has an internal pacemaker and has had all three of his athletic children screened for heart issues. If it were not for that AED on the ski slope that day, Chris says, he would not be alive.

More Stories From The Heart